The image above is the graphic of today’s statewide numbers, as published in the Seattle Times each day.  Click đây to see all the most recent news about the pandemic from the Times.

Otherwise, the rest of this post is our regular synthesis of the local countywide Public Health data, provided by Will Daugherty of Trung tâm khoa học Thái Bình Dương. Cảm ơn Will!

Các key indicators that the State and County are using to make decisions about reopening include a measure of the total number of cases reported in the previous 14 days per 100K residents.  The target for this metric is less than 25.  The second and third graphs below show this metric.  The second graph goes back to March 12, the first day on which the metric could be reported.  The third graph provides a more detailed view of results in the last several weeks. 94.1 cases were reported per 100K residents during the 14-day period October 9 – 22. 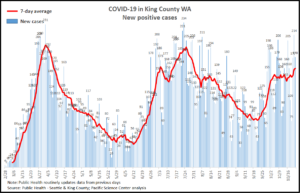 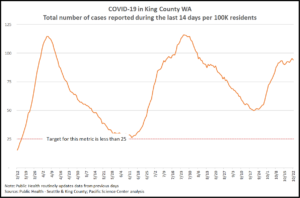 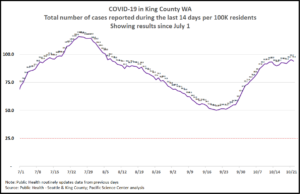