Statewide case numbers are going up, and today, Governor Jay Inslee announced a new mandate that requires facial coverings in public.  While the order will officially begin Friday, it is recommended that we begin to wear face coverings at all times in public immediately, both indoor and outside.  King County has already been underway with a similar order since May.

While the new order is more restrictive than King County’s, there will still be exceptions to the mandate.  Children under 5 years old are exempt, though masks are recommended for children between 3 and 5.  Also exempt are people who are deaf or hard of hearing and are communicating with others.  The order will also allow for removal of masks while eating at a restaurant or engaging in recreational activities alone or with other household members.

Otherwise, the rest of this email is our regular synthesis of the Public Health data, provided by Will Daugherty of Тихоокеанский научный центр.  Thanks Will!  If you are interested in more details about the data in the county dashboard, the Public Health Insider today provided a helpful FAQ.

Общественное здравоохранение обновило панель данных.  The daily summary shows that there were 9,369 confirmed cases of COVID-19 in King County as of 11:59 on June 22, 96 more than the previous day.  There have been 584 confirmed deaths in King County due to COVID-19, 6.2% of all confirmed cases.  Цифры, которые сообщает Public Health каждый день, включают задержанные результаты предыдущих дней.

The key indicators that the State and County are using to make decisions about reopening include a measure of the total number of cases reported in the previous 14 days per 100K residents.  The target for this metric is less than 25.  The second and third graphs below show this metric.  The second graph goes back to March 12, the fourteenth day of reported cases.  The third graph provides a more detailed view of results in the last few weeks.  31.3 cases were reported per 100K residents during the 14-day period June 9 – June 22.

Unless this trend reverses quickly or the State and County decide that it is no longer essential for this key indicator to be below 25, I do not see how King County can move to Phase 3 on July 10, three weeks after moving to Phase 2 on June 19. 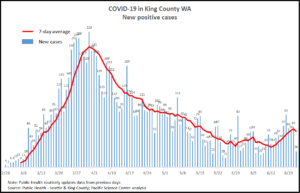 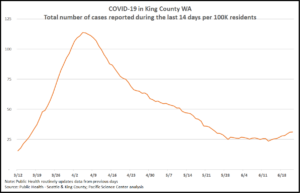 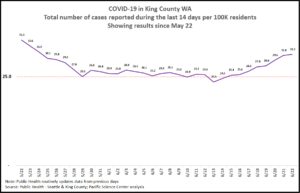