Photo by KOBU Agency on Unsplash |

I’ve been talking for a few weeks now about the “K-shaped recovery” — where wealthy Americans are recovering quickly (even prospering) while most everyone else continues to struggle. It’s important we focus on those who are struggling and being left behind. That’s why this NPR poll is so important: it finds that the vast majority of households report facing serious financial problems during the pandemic, with Black and Latino households experiencing the greatest difficulties. By income, the difference is incredibly stark: 86 percent of households earning less than $30,000 a year have had financial problems over the past few months, while just 22 percent of households with more than $100,000 per year report serious financial problems.

This crisis is amplifying existing economic divisions. We really are becoming two Americas: a small cohort of wealthy Americans insulated from the economic devastation separated from the vast majority of America who are suffering economic insecurity, instability, and a crumbling support system.

The problem is that a K-shaped recovery is structurally rickety, unsustainable and bad for growth. Without wide-scale economic inclusion—without the spending power and investments of working, poor, and middle-class Americans, and without local policy-makers taking bold action to get us on the path to economic recovery—the whole economy will eventually collapse. It’s just a matter of time.

Washington unemployment insurance claims increased by 10 percent during the week of August 30 – September 5: 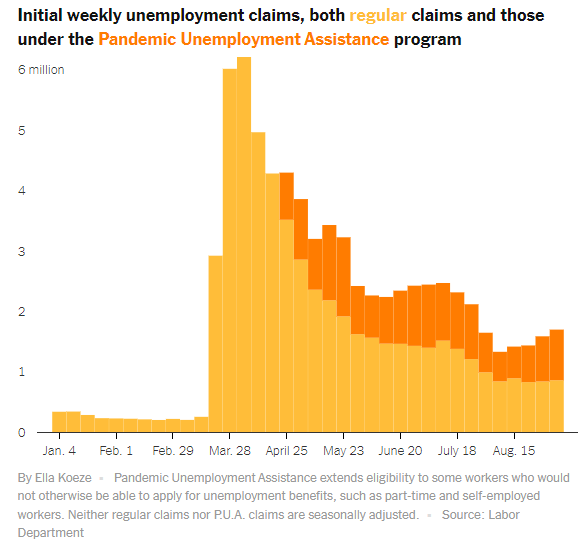 This week’s must-read is a RAND Corporation economic report on the leisure and hospitality industry, which was hit particularly hard by coronavirus lockdowns. The industry nearly halved in size in the first three months of the pandemic, with just 53 percent of workers still employed by the end of April. And more leisure & hospitality workers have been transitioned from temporary to permanent layoffs than workers in other sectors, as well: 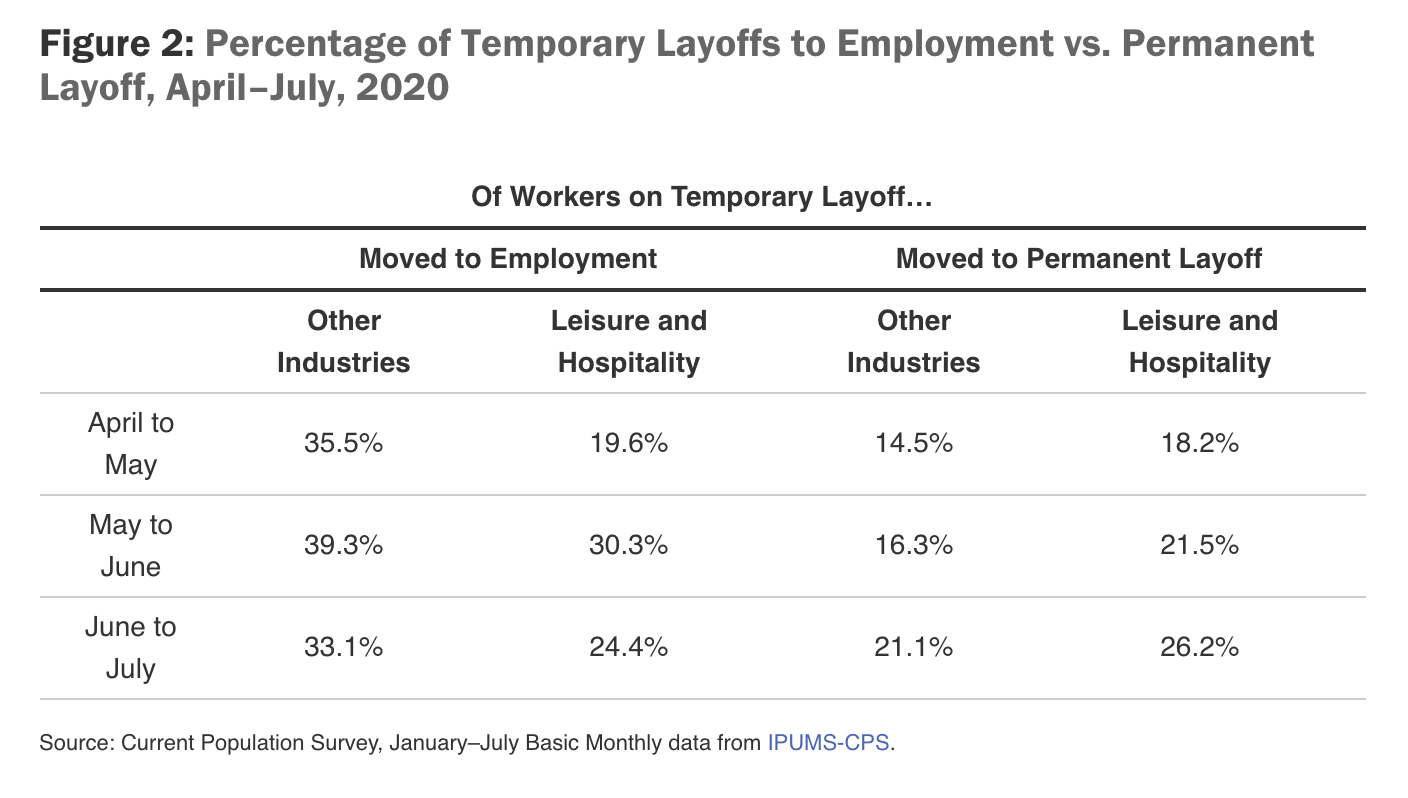 The Rand report also notes that in “July we crossed an unfortunate benchmark: more workers downgraded their employment status than upgraded. Of the 7.6 million people on temporary layoff in June, by July 2.4 million were working, but 1.7 million moved to permanent layoff and 1.2 million left the labor force.” If it wasn’t already abundantly clear, this recovery is going to be slow and painful. 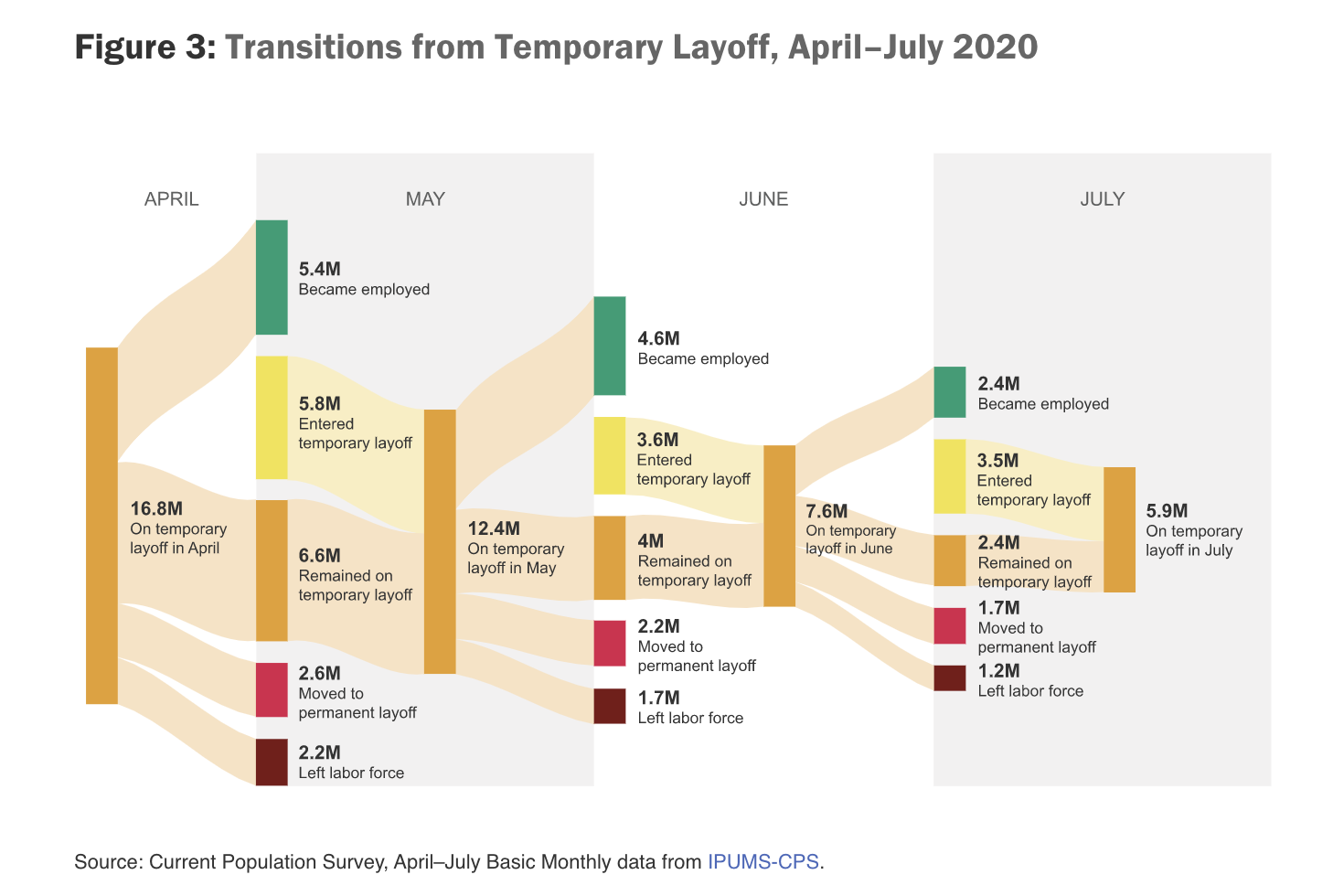 The Senate killed Majority Leader Mitch McConnell’s so-called “skinny” $500 billion stimulus bill this week. McConnell’s bill offered no stimulus checks or money for local and state governments, and it was slapped together as a sop to trickle-down Republicans who believe that any spending on coronavirus relief is too much. Democratic Congressional leadership correctly argued that the “skinny” bill didn’t meet the scale of the problem. The possibility of a stimulus package passing through the Senate before Election Day is now in doubt.

In his new publication The.Ink, Anand Giridharadas notes the six-month anniversary of the official declaration of the coronavirus pandemic by declaring that billionaires have won the pandemic. He cites a new Oxfam report on runaway corporate profits that have only grown larger during the pandemic: “Chevron announced cuts of 10-15% of its 45,000 global work force despite spending more cash on dividends and share buybacks during the first quarter of the year than they generated from core business.”

Those who believe a vaccine will  get us out of this economic crisis could be waiting for a lot longer than expected: The Director of the National Institutes of Health testified before Congress yesterday that “to try to predict whether it happens on a particular week before or after a particular date in early November is well beyond anything that any scientist right now could tell you and be confident they know what they are saying.” Indeed, one of the major vaccine trials in Great Britain has been halted to investigate a suspicious  inflammatory reaction in one of their vaccine trials.

Meanwhile, Americans who rely on the United States Postal Service to deliver their prescriptions on time have found that prescription deliveries which “might typically take two or three days were instead taking three to four.”

New data from Goldman Sachs shows that 1-in-3 small businesses across the country say they won’t or don’t know if they will survive the pandemic and ensuing economic crisis. 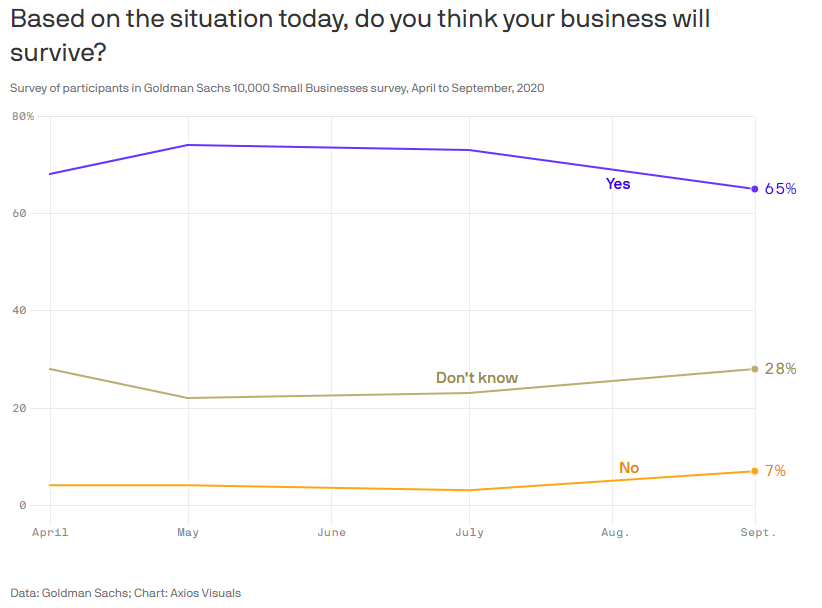 Dominic Holden, former news editor at The Stranger, wrote an editorial for Crosscut that serves as a ferocious rebuttal to the Seattle-is-dying crowd: “What happened is that Seattle used to be perfect but has now been dying constantly for 50 years, according to the same people who keep floating a theory that Seattle can be fixed if illness and poverty become crimes.”

In an oped for the Seattle Times, Joshua Liao and Amol Navathe propose a three-point plan to fix racial disparities in the government’s COVID-19 response. “Black and Latino individuals are infected at higher rates than white individuals, while COVID-19 hospitalizations and deaths have been higher in communities with more racial and ethnic minorities and individuals living in poverty. The evidence is clear: Race, ethnicity, poverty and other social determinants of health can dictate COVID-19 risk and outcomes,” they write.

At a time when many employers are cutting back, Amazon is preparing to hire 33,000 people for everything from warehouse work to corporate management positions, reports Benjamin Romano at the Seattle Times. And those who have worried that Amazon was pulling out of Seattle should take note: “The 33,000 open corporate and tech roles, whose average pay is $150,000 a year, are across the company’s businesses and physical locations, including its Seattle headquarters — which had 6,585 openings listed on the company’s career site Wednesday, more by far than any other location — and 18 tech hubs in cities across the country,” Romano writes.

Here is the Seattle Times infographic on COVID-19: 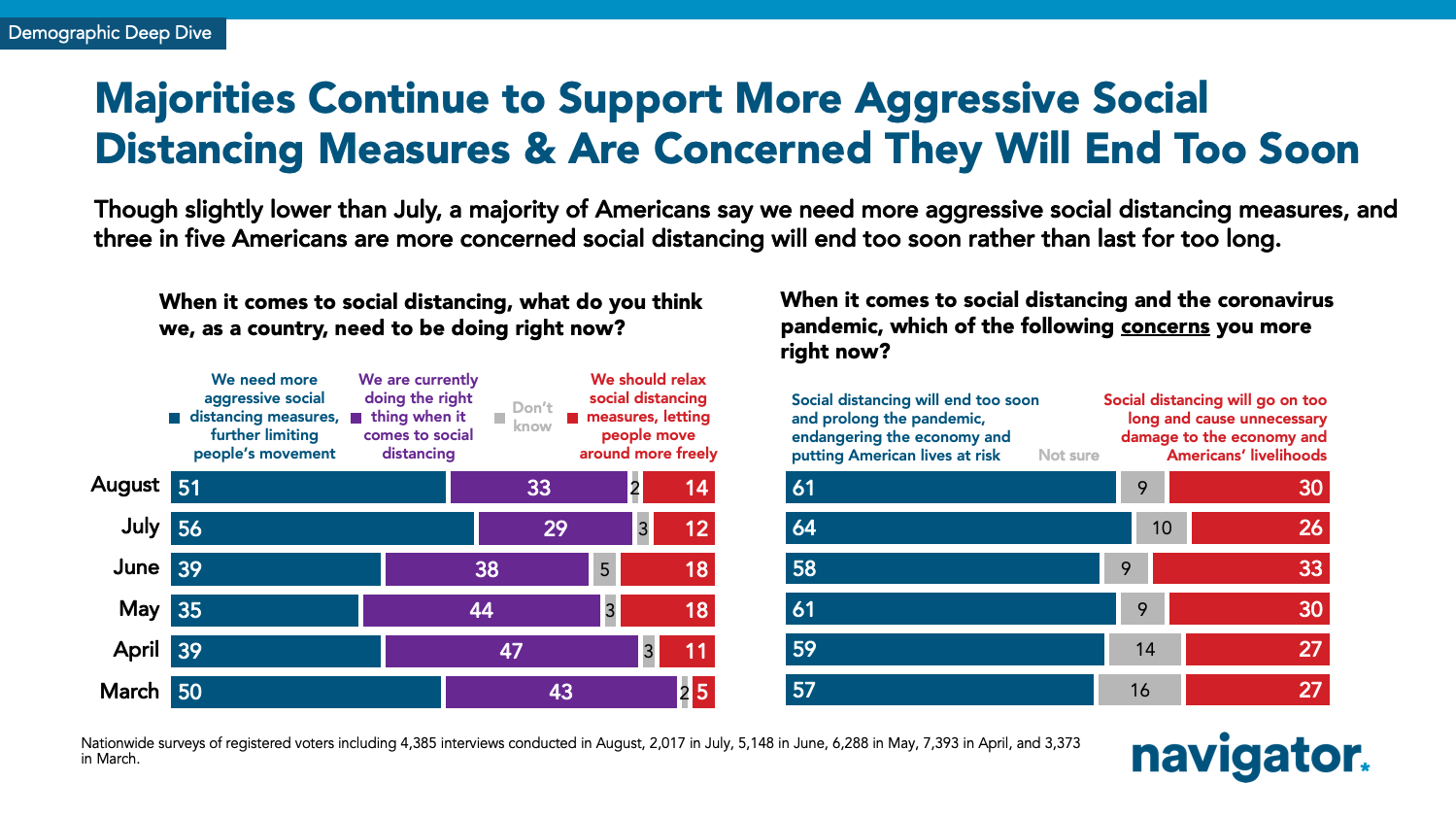 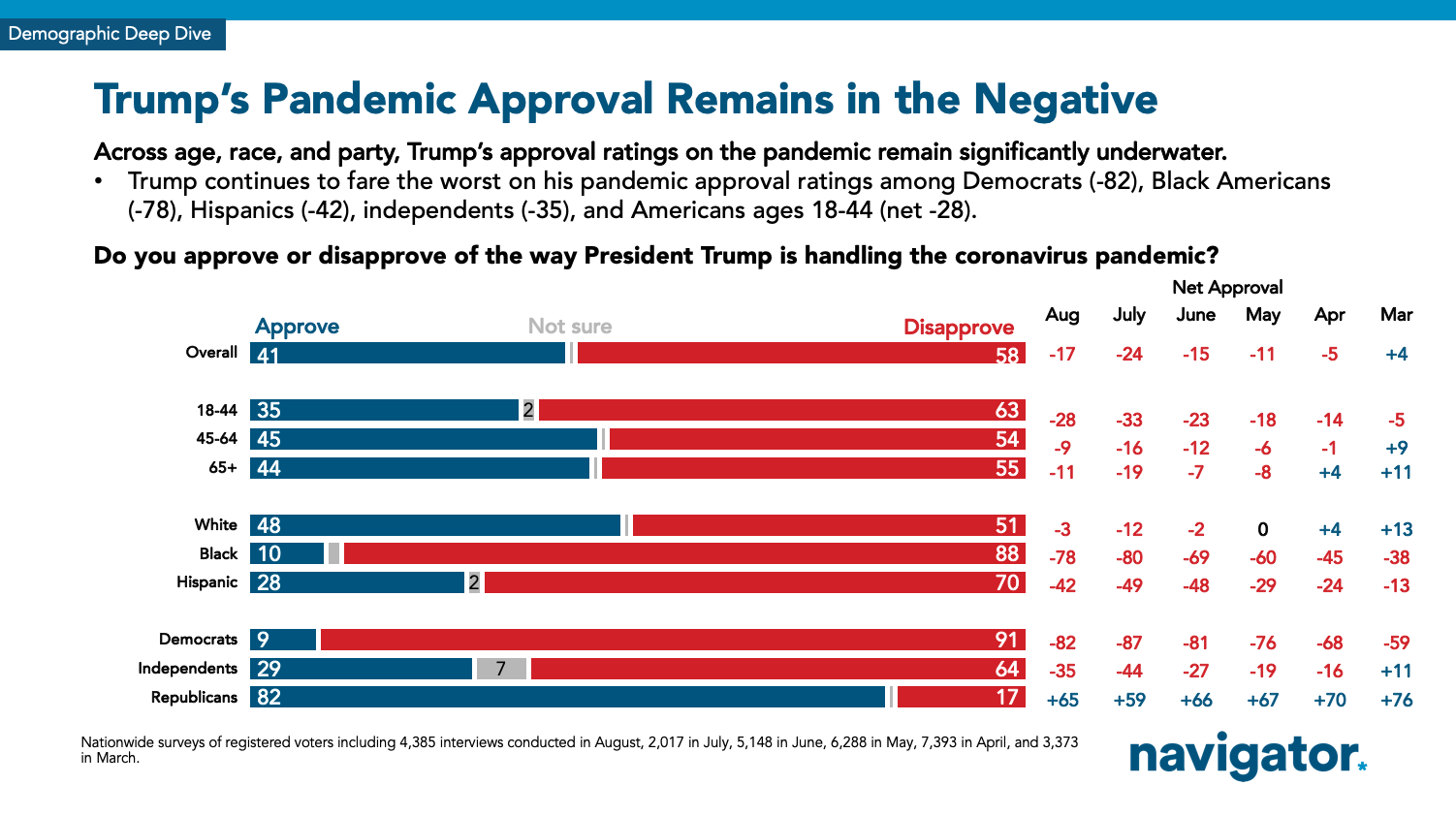 I’ve been sharing this American Compass report. And if you think it’s remarkable that I’ve been promoting the work of a conservative think tank, I can only respond by saying this is a remarkable report. Signed by a number of prominent conservatives including Senator Marco Rubio and former Romney advisor Oren Cass, the essay, titled “Conservatives Should Ensure Workers a Seat at the Table: Statement on a conservative future for the American labor movement” makes a strong case for conservatives to support unions and collective bargaining. I want to be clear that I am not a conservative and I do not endorse the conclusions that American Compass draws here—they argue that collective bargaining should replace government regulation, not work in concert with it, for instance—but I do find it refreshing that the first reason they issue for supporting unions is shared economic prosperity, which is a cause that every progressive I know believes in.

Progress is made when both sides can find a shared value to serve as a platform on which to build solutions. We might not agree on everything but at least we can argue about the right things. When I read this document, I have some small hope that sometime in the near future we might be able to work together to construct a recovery that benefits all, not just the privileged few.