After a July drop, the local number of new cases has leveled off again.  And while we can cautiously celebrate progress towards a widely-available vaccine, the creative industries should continue to settle into the new norm for the foreseeable future.

Some have looked towards interim measures that allow resumed production, using screening and new testing technologies to improve safety.  Others have figured out how to re-train and work in other industries.  But in many if not most cases, creative workers continue to be left without employment or income as federal legislators drag out the approval of a new stimulus package.

As you can see in the numbers below, King County successfully beat back the surge of new cases in July and have settled into a plateau just beyond 80 cases per 100K residents.

Diligence must be maintained.  As covered by The Seattle Times, there are still hotspots where cases are booming, especially in South County and areas of the Eastside. But throughout the County and State, there is little chance of passing into further phases of reopening this fall, especially for venues, events and gatherings.

Ultimately, we continue to hope for a widely-distributed vaccine.

Progress continues swifter then any vaccine development in history, though a January goal seems unlikely to be met. A CNN story reported that while trial participant numbers overall are on track, officials are concerned about (understandably) low enrollment among Black and Latinx communities.  While it will delay the eventual release of a vaccine, it is necessary that developers ensure the safety and equity of the process among those who are in many cases the most vulnerable.

Even when it is released, it may be difficult to convince folks to use the vaccine.  According to a poll by NBC, only 44% percent of American adults say they’d get the vaccine.

In any case, that means it may still be another 6 to 12 months or more before a vaccine is available widely. In the meantime, we can turn to other innovations for help in re-opening and operating safely.  In particular, testing improvements may allow for a broader range of activities.

Just last week, the FDA issued authorization for the use of a new method of saliva testing to the Yale School of Public Health.  As reported by The Washington Post, such methods offer quicker turnaround on results and have a more flexible capacity. That’s why they’ve been used by the NBA and may offer solutions for other workplaces in entertainment, sports, culture and beyond.

We see this creative screening and testing process showing up locally in efforts around the country, some of which have brought musicians and other creatives back to work.

Recently, the LA Phil announced an upcoming media series featuring a combination of past performances, new recordings and new interviews. Production involved some complex logistics to ensure the safety of production crews, performers and other workers, as covered in this article from the San Francisco Classical Voice.

While the piece above focuses on the experience of classical musicians returning to work during COVID, it references a key piece of policy released by LA County. The Reopening Protocol for Music, Television and Film Production: Appendix J was published in June, offering very specific guidelines for site logistics, audiences, performers, crew, equipment and more.

Similar (though less detailed) guidelines have been released for Seattle and Washington State. Washington Filmworks has even broken down the recommendations for film production by department.  While many of these resources are written for filmmakers, they apply to musicians, dancers, actors and other production environments as well.

The other thing to note in these articles is just how much effort (and cost) is involved to ensure proper safety precautions.  For many, it just isn’t possible.

That means, millions of creative workers throughout the country will continue to be underemployed and economically challenged for months and possibly years.  While both the long-term and immediate projected impact on arts and the creative sector are staggering, federal legislators seem no closer to passing a new stimulus bill to continue unemployment benefits and other aid.  After a $3T package by House Democrats stagnated and a White House proposal of a $1T package was ignored, Senate Republicans are working up a version for $500B, which is likely too stripped-down to work for the Dems.

In the meantime, the Federal dollars for extra unemployment payments, which is floating the cost of food and rent for many out-of-work gig workers, is about to run out.  Hopefully, the urgency is evident to legislators and they are ready to overcome partisanship to avert an even deeper crisis.

The key indicators that the State and County are using to make decisions about reopening include a measure of the total number of cases reported in the previous 14 days per 100K residents.  The target for this metric is less than 25.  The second and third graphs below show this metric.  The second graph goes back to March 12, the first day on which the metric could be reported.  The third graph provides a more detailed view of results in the last several weeks. 82.8 cases were reported per 100K residents during the 14-day period August 4 – 17. 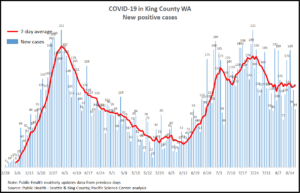 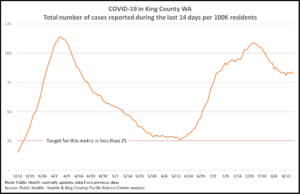 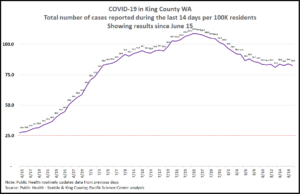