Photo by Ben Garratt on Unsplash |

COVID’s many troubling economic impacts are only now just starting to come into focus, just as many eviction moratoriums come to a close and Congress considers reducing and/or ending the $600 monthly unemployment bonus.

Yesterday’s post in the Public Health Insider laid out the local unemployment numbers in stark terms with almost 436,000 new unemployment claims, putting the county unemployment rate just over 14% (up 2.7% just this year.)  That’s the largest leap in unemployment in modern times.

Whether in lost jobs, lost revenues or lost opportunities, the numbers show devastation across the economy and especially among Latinx, Black and Native Hawaiian/Pacific Islander communities.  With a pre-pandemic wage gap of as much as 39%, the income loss in communities of color is devastating.  And those inequities are even further compounded by gender.

Within the creative sector, the losses and inequity are even worse, though the lack of current, coherent and consistent data on the sector makes it hard to estimate by what degree.  With the near total closure of venues, events, cultural attractions, film productions and related economic activities, artists and creative workers have taken a massive toll.

To better understand the needs of the sector, the new creative industry organization Whipsmart is conducting a survey on the sector’s experience of and need for social safety net services.  All creative workers should take 20 minutes to complete the survey. The deadline to fill it out is Wednesday, August 5.

The key indicators that the State and County are using to make decisions about reopening include a measure of the total number of cases reported in the previous 14 days per 100K residents.  The target for this metric is less than 25.  The second and third graphs below show this metric.  The second graph goes back to March 12, the first day on which the metric could be reported.  The third graph provides a more detailed view of results in the last several weeks.  103.8 cases were reported per 100K residents during the 14-day period July 13 – 26. 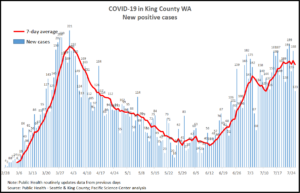 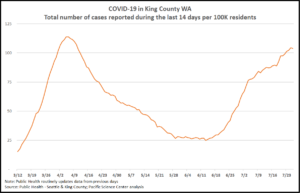 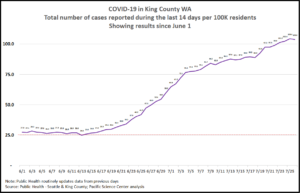