In a video released earlier this week, our own local Fauci (Dr Jeff Duchin) reviewed the latest numbers on COVID-19 cases, hospitalizations and deaths before answering questions about expectations and guidelines for the fall.

In the video, Duchin didn’t reveal any huge new revelations about our local situation or the expected timeline for recovery, but he did bring together the various numbers into a succinct snapshot of our current moment.

Firstly, Duchin opens with a review of the case numbers, reminding us that though King County is doing well overall, the case rate is still “too high for comfort,” and that we should expect ongoing and significant challenges in the coming months.  Here are some of the critical datapoints he shared:

Here is the full video:

COVID-19 cases in King County are too high as we head into colder weather. We’re live with our health officer Dr. Jeff Duchin to talk about how COVID-19 in spreading in King County, and what we can do to reduce cases before cold weather and flu season arrive.

As you can see, Duchin went on to implore us all to remain vigilant and responsible, especially in our social gathering.  Young people especially have emerged as significant spreaders, and gatherings such as birthday parties, group camping, weddings and graduations have been on the rise.  He reminds us how vital it is to wear masks and remain socially distant.

Finally, before answering questions, Duchin gives us a quick picture of the future as we approach a time with vaccine.  He stated confidence in a vaccine by the end of 2020 or early in 2021, but reminded us that distribution will be staged and likely extended.  He didn’t share a specific timeline, but emphasized that healthcare and essential workers would likely be prioritized at first.  He did ask that everyone consider a flu shot as we enter into fall season while continuing to limit activity outside of the home.

With all that said, we are pleased that museums have found a way to reopen under the current guidelines, as well as some film and photo production.  Unfortunately, it remains highly unlikely that we will see many venues and stages holding events any time soon.

The key indicators that the State and County are using to make decisions about reopening include a measure of the total number of cases reported in the previous 14 days per 100K residents.  The target for this metric is less than 25.  The second and third graphs below show this metric.  The second graph goes back to March 12, the first day on which the metric could be reported.  The third graph provides a more detailed view of results in the last several weeks. 79.9 cases were reported per 100K residents during the 14-day period August 12 – 25. 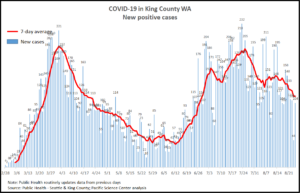 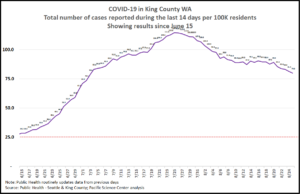