Are you keeping up with the Public Health Insider?  If not, we recommend it!  Just this past week, they had two posts of import.  Just on Monday they announced some new testing sites in South County.  And over the weekend, they had an amazing post regarding online resources for queer community during the pandemic.

Monday’s announcement concerns new testing sites in Renton and Auburn.  These will bring additional free COVID-testing to south King County, where communities have been disproportionately impacted by COVID-19. A new site in Auburn opened today, Sept. 1, and a new site will open in Renton on Sept. 8.

Also check out the post by guest blogger Mars (SOAR Social Media Ambassador), which has a strong personal narrative, great perspectives on the challenges for queer folk during COVID-19, especially those with gender dysphoria.

As Mars says in the post, “Transgender people and especially transgender youth [are] more vulnerable to the stress and instability of this pandemic. However, online queer communities have been popping up in every facet, that I really encourage you to seek them out if they could be of support to you.”

The post also offers a slew of online resources, such as the following:

The key indicators that the State and County are using to make decisions about reopening include a measure of the total number of cases reported in the previous 14 days per 100K residents.  The target for this metric is less than 25.  The second and third graphs below show this metric.  The second graph goes back to March 12, the first day on which the metric could be reported.  The third graph provides a more detailed view of results in the last several weeks. 66.0 cases were reported per 100K residents during the 14-day period August 20 – September 2. 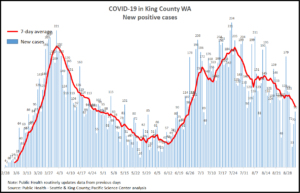 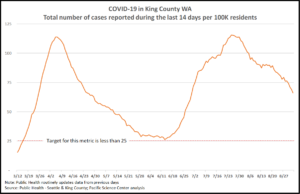 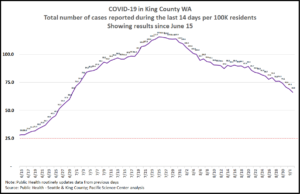